Home » Iran: Islamic regime and theocratic State are in crisis, and repression is intensifying. Down with Raisi and Khamenei!

Iran: Islamic regime and theocratic State are in crisis, and repression is intensifying. Down with Raisi and Khamenei! 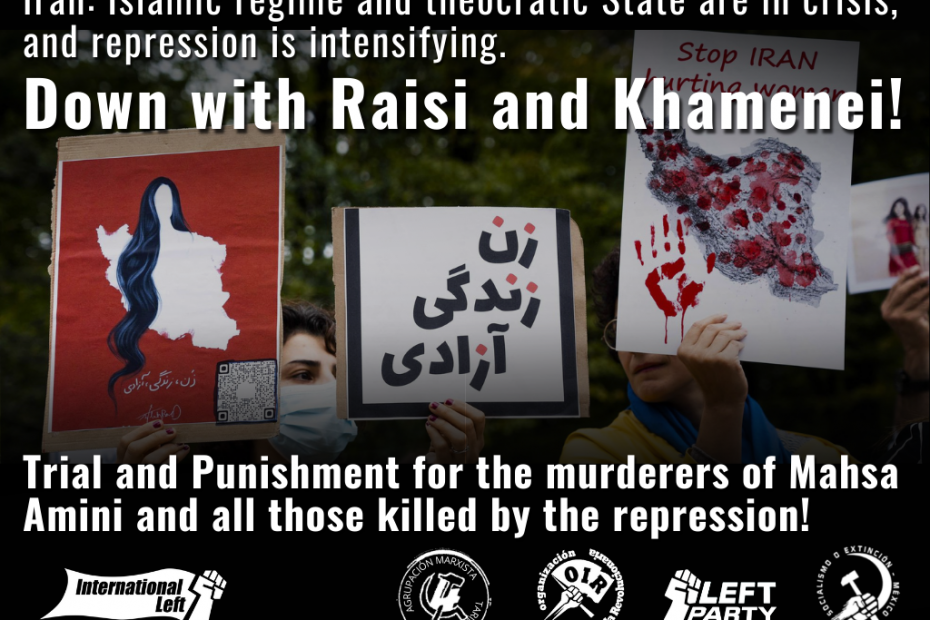 Trial and Punishment for the murderers of Mahsa Amini and all those killed by the repression!

Sixty days of demonstrations against the fundamentalist Islamic regime of Iran evidenced, in addition to a phenomenon of organization that includes thousands of women, students, and some sectors of the workers and members of the oppressed nationalities of the Kurds, Arabs, and others, a profound crisis of the government and the regime.

There are also many Persian Muslims who disagree with the criminal and oppressive fundamentalism of the government of Ebrahim Raisi, whose Moral Police arrested and murdered Mahsa. Amini, a woman of Kurdish origin, in Tehran. Detained on September 13, she died in the hands of her captors on the 16th. According to the Moral Police, she was arrested for wearing her hijab “too loose.”

The ” Gasht -e- Ershad, “which can be translated as “orientation patrols,” better known as “moral police,” are armed units of the Iranian security forces that patrol the streets day and night, whose task is to check, arrest, mistreat, punish and imprison those who do not comply with the laws of the Muslim dress code in public or defy the laws of Sharia, the Fundamentalist Law by which the government is governed and imposed on the population.

Tens of thousands of Iranians and Kurds, young people and women, students and workers have been demonstrating, demanding trial and Punishment for those responsible for the murder of Mahsa Amini. The government mobilized the police massively to crush the demonstrations, killing at least another 250 people; hundreds more were injured, and nearly 2,000 were arrested. Some detained have already been subjected to summary trials and brutal prison terms. In some cases, death sentences have been handed down. The Revolutionary Guard has asked Supreme Leader Ali Hosseini Khamenei to give the order and vow to swiftly liquidate the protests in a forceful and final manner.

This government crisis has once again shown that the Raisi government is nothing more than a puppet of the ruling clerical caste whose Supreme Leader, Ali Hosseini Khamenei. He is the one that has power over the executive and parliament and is based in a Great Persian clerical caste supported by the Iranian Revolutionary Guard, which, despite its name, has nothing “revolutionary” and much of a regular army that represses its people and staunch defender of fundamentalism against all its internal and external adversaries. The reactionary and oppressive clerical regime seeks in its propaganda to blame other countries for the demonstrations in response to its own criminal acts. Let us reject the lies of Raisi and Khamenei!

The government and the genocidal and criminal regime of Khamenei’s fundamentalist clerical caste are in crisis. Their only chance to recover what they have lost is to repress with blood and fire and punish all those who claim to fight for democratic or egalitarian processes. It is, therefore, necessary that we raise our solidarity with those who fight in Iran and call on the insurgent masses to form committees of women, workers, and peasants to throw the clerical caste from power, put an end to fundamentalism and establish a Republic of workers and peasants, the only guarantee for the full equality that only socialism can offer.

Trial and Punishment for the murderers of Mahsa Amini and all those killed by the repression!

Freedom to all detainees! Annulment of all convictions, particularly death sentences! For the absolute sovereignty of demonstration, protest, and demands!

Down with Sharia and forced Hijab!

Dissolution of the Moral Police and the Revolutionary Guard!

For a self determination for the Kurdish people!

For the right to organize and use the self-defense of the mass movement!

Down with fundamentalism! Total separation of the Church from the State! Down with the Clerical Caste and the Supreme Leader!